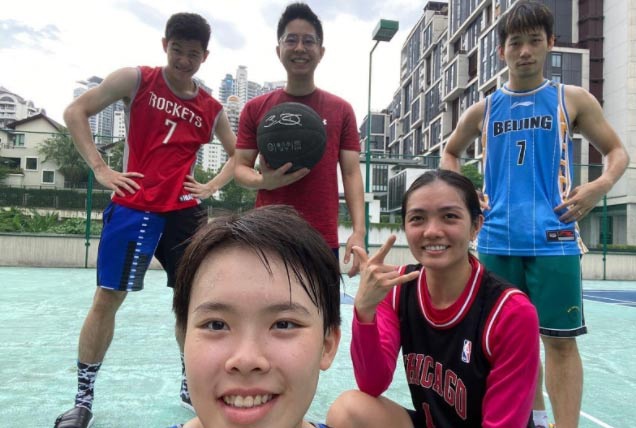 This year there will be no more international competitions but only focus on training. The Malaysian national badminton team players headed by the number one men’s single Li Zijia began to feel bored. The coaching staff adjusted their plans in time, so the players recently started playing football and basketball. Outdoor activities, thus adding new training fun.

Both father and mother are basketball players. Everyone may not be unfamiliar with Li Zijia, who is 186 cm tall, playing basketball, but besides being good at badminton and basketball, he can actually play football, and this interest has started long ago.

When interviewed after training, the 22-year-old Li Zijia said that he has actually started playing football since he was a child. He and his teammate Su Weiyi, the Guoyu Men’s Doubles teammate of the same year, were adolescents. Whenever they finished their strength training in the gym of the National Sports Institute, You will go to the stadium next door to play football for one to two hours.

In the last two or three weeks of weekends, Li Zijia has regained the fun of his teenage years. He and his teammates in the national badminton team have conducted outdoor activities such as 5-a-side football and basketball. These training adjustments have improved his previous lack of international competitions. Can only be sulking in training blindly.

There has been no international badminton tournament since the All England tournament in mid-March. The Badminton Association also decided not to send players to participate in the remaining Danish Open this year. The players are not robots. They lack the excitement of participating but just blindly training without goals. , It does make people feel bored.

Li Zijia said: “Our 12 men’s singles players and 12 men’s doubles players are divided into 4 teams to play football at the 5-a-side football field of the National Institute of Sports. Playing basketball on the court. In fact, I also like basketball and football, so having these activities outside of badminton training will feel fun and fresh."

Although football and basketball are both sports that are more prone to injuries, Li Zijia said that this is only an outdoor activity outside of badminton training. Of course, they will not try their best to have fierce physical collisions, and pay more attention to themselves, so they can avoid injuries. problem.

In addition to outdoor activities, the Malaysian Badminton Association also plans to hold a third team match from November 6 to 12. The format is a mixed team match similar to the Sudirman Cup. Players will be divided into 4 teams to compete, and in order to increase The game is fun. In addition to the original 5 individual events of men’s singles, women’s singles, men’s doubles, women’s doubles and mixed doubles, the second men’s singles and three-on-three events will be added, and the scoring will be based on 5 games and 3 wins. Points system.

Li Zijia said that the badminton co-organization of the intra-team match can really give players a feeling of competition, but the opponent is still the teammate in the usual training, so the feeling of the game is still difficult to compare with the international competition, and because the group list has not yet been released, so He is still not sure if he will end up in a 3-on-3 event.

As for the Danish Super 750 to be played next week, Li Zijia said that after Kento Momota and other Japanese players also retired, this event is a bit like the European Championship. If he doesn't participate in the competition, he will not pay attention to other players' events, so He will not go to watch the game in particular next week.